“The Ego has Landed” Fame and Fortune, some fighters become super stars and others not, why? 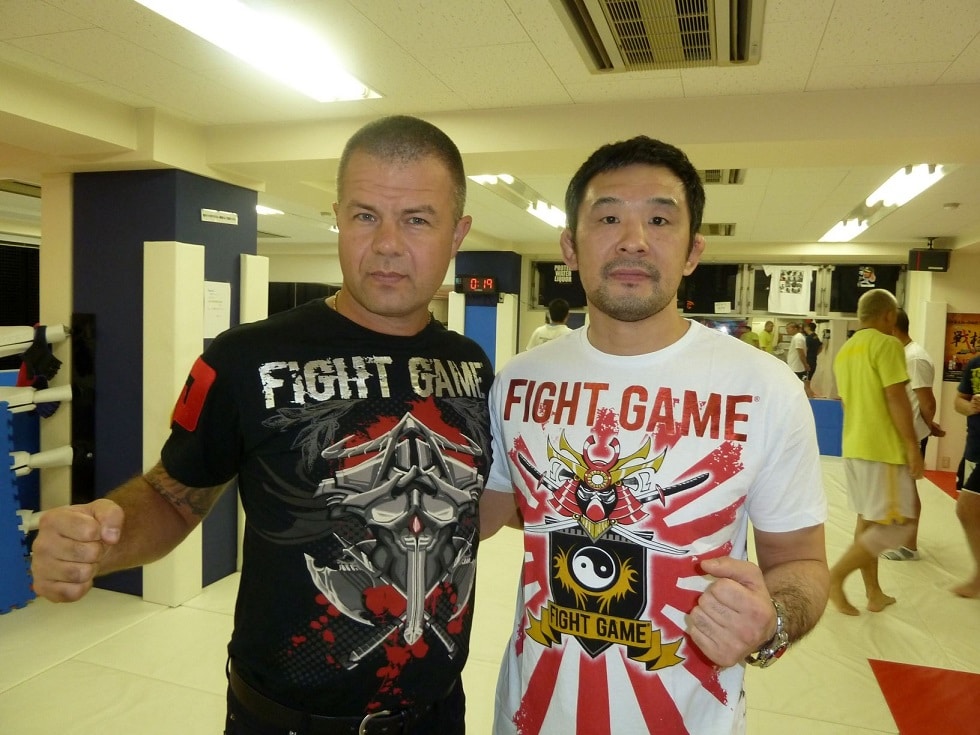 The picture with me and Sakuraba in his dojo in Tokyo Japan is epic for me. Sakuraba must have been the most popular fighter in MMA at one point. He was named the Gracie Hunter because he defeated Royler Gracie, Renzo Gracie, Ryan Gracie and  Royce Gracie, Sakuaraba was kryptonite for the Gracie family. Sakuraba did not really speak English, but boy oh boy he sure was a character in Japan and it was hard to not like him. He should have had a beer sponsor for life (insiders know what I mean) and he was a TV celebrity. The number of commercials and promotional activities he did was impressive and so was his comical talents! He was definitely one of the fighters that contributed to making Pride FC a household name in the Japan. Even later when he ended up in the hospital a few times, he never wanted to give up and often only fought much heavier opponents, he smiled and joked from his hospital bed. They even made a theme one time showing Sakuraba with bandages everywhere on his way to training and the ring being old and having injuries but still full of fighting spirit. The announcement from Dana White to put Sakuraba in the hall of fame did not come as a surprise, if there is any fighter who deserves to be in the UFC hall of fame it is Sakuraba!

So, what does make some fighters reach the status of super stars?

To become a champion takes, talent, super hard work, dedication, discipline and an intense daily routine of training, a healthy diet, taking care of mental health and lots of rounds in the gym! Then there are the ingredients of having the right management, trainers, sparring partners, choosing the opponents and timing! 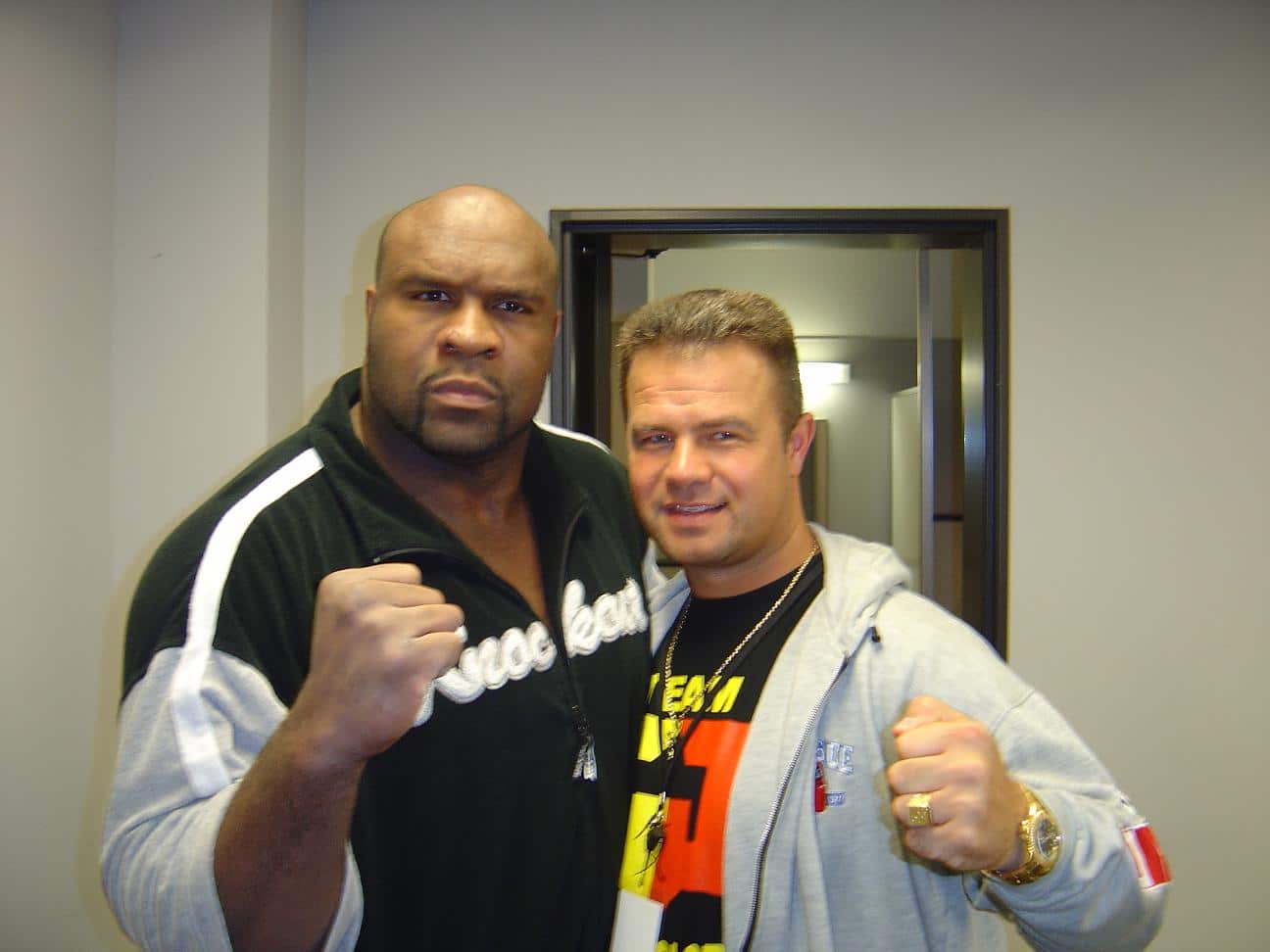 Bob Sapp made his career out of two fights both against Ernesto Hoost, both fights he won and the timing was right. K-1 they thought they had a mega American star, but lots had to do with the health of Ernesto Hoost who was maybe 50% of what he was entering the fight not to mention an illegal blow in the back of the head. So, when Bob Sapp faced Mirko Cro Cop, Remy Bonjasky and Ray Sefo he lost and was DQ (illegal punch to the ground when Remy was down). By now K-1 realized Bob Sapp would never be the K-1 GP champion, partly that was the “managements” fault (which he did not have, signed off to K-1). Bob Sapp was not the champion everybody thought he would be, but he sure was a great actor, his heavy loud laughing and crazy faces he pulled made him the best paid fighter in Tv commercials in Japan. The amount of talk shows became almost a daily routine and there was not much time left for training or focussing on the next fight. But he was a rating canon for Fuji TV and so was Akabono, the Sumo wrestler from Japan who started a K-1 and MMA career, he almost lost all of his fights, but scored the best ratings every time his fights where broadcasted.

Hong Men Choi from Korea was the next Korean fighter, he was extremely tall and heavy who was introduced to become a super star in Japan and Korea. Unfortunately, his dream ended when Hong Men Choi supposed to fight Brock Lesnar in the US Dynamite show in the US, it was cancelled by the athletic commission. They found some abnormal growth deficiency in Hong Men Choi’s brain and he did not get a permission to fight! 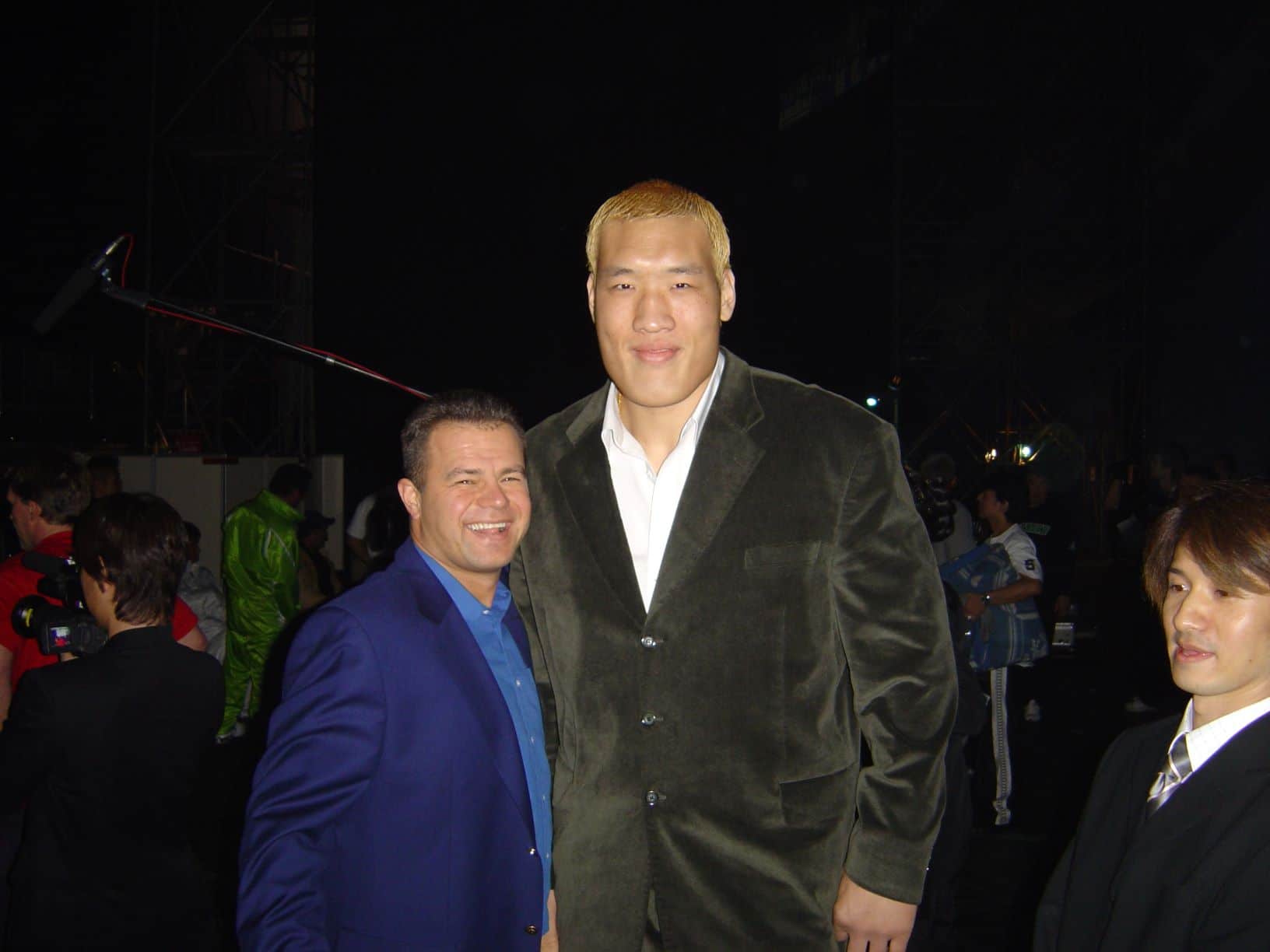 Muhammed Ali was the first example of a real fighter with a huge big mouth “I am the Greatest “and then proved it to the world. His decision to not fight in the Vietnam war because he did not want to kill other human beings he did not know, was one of the reasons Cassius Clay (later changed his name in Muhammed Ali) was loved by everybody. I remember I would wake up living in the Netherlands as a kid to see the live broadcasting of Ali fighting at 3 Am Dutch time. A small black and white TV with 12 channels, my whole family would be awake and sit for the TV and comment on the fight.

Mike Tyson the boxer who became a worldwide household name, his impressive way of knocking out mostly much bigger opponents was loved and respected by the fans. His life story of making millions and losing all of it, prison and his love for pigeons and finally doing stand up comedian show is extraordinary, how can this fighter not be interesting to any other human being?

Chris Eubanks would enter the ring with the song ‘Simply the Best” by Tina Turner and then do his famous recognisable thing before he went into the ring. He would just stand there on the edge of the ring with his chest raised in the air toughing both gloves, looking around and the fans loved it.

“The Ego Has Landed”

Badr Hari never became a K-1 Gp championship winner (finalist he came close) but his bad boy image, constant media press attention made him one of the best paid kickboxers. His relationship with Estelle Cruyff (niece of the famous soccer player Johan Cruyff) among other celebrities were in the daily news in Holland and elsewhere. Badr’s emotional out-bursts after he lost a fight and his personal life challenges were epic and the people loved it, it made him relatable and obnoxiously amusing. In Japan he became very famous!  You would say people would distance themselves from that behaviour but the TV and fans loved it. Because his behaviour and popularity he was even rewarded with a sponsorship deal with KIA cars. I can only say, well done, well played, well deserved!

Conor Mc Gregor is Irish and he is proud of it and so he should be, his big mouth is not just trash talk he also, delivers. Mc Gregor became a champion in two weight categories in the UFC and made huge bets on his on performances even challenging Dana White. Mc Gregor’s fame is well managed as his co-promotion fight with Mayweather goes in the history books as the fight of half a billion $. The latest incident was Mc Gregor throwing a barstool at a bus with his future opponent Khabib Magomedov in it! This clip will be played a thousand times before the fight will take place in October. 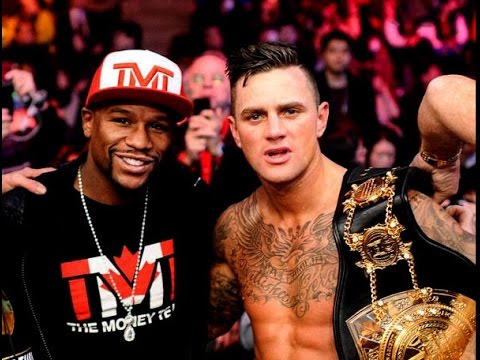 A classic example of promoting your brand at any opportunity, Mayweather here with his “The Money Team” outfit with Nieky Holzken (picture taken after Nieky won the Glory Tournament) in Tokyo Japan

Mayweather another character he is the undefeated world champion in boxing who made his image all about money his trademarked company TMT “The Money Team” became a reality! Put two of these huge names and “loud mouths” together (Mc Gregor and Mayweather) and you get millions of spectators willing to pay big bucks to see the fight! Happy sponsors, great TV ratings, happy fighters and possible rematches plus tons of controversies!

In some rare cases actual movie stars take a U-turn and start a professional fight career, one of the few people who did this is the star from the movie 9 1/2 weeks Mickey Rourke. I recommend everybody to go see the movie the wrestler, his performance is awesome in this movie. Rourke is a character whose controversial political views has stopped his career for a few years. His love for President Putin (wore t-shirt of Putin in 2014) is well known and his support for Joe Doherty an IRA member who was seeking asylum in the US. Mickey Rourke gave 1.5 million of his earning he donated for the support of the asylum case of Joe Doherty.

Mc Gregor also can be seen recently together with President Putin and these pictures became worldwide frontpage news. Hyping the fighter’s image good or bad, they are in the news and people talk about it!

Incredible fighters but not world famous and not extremely rich! 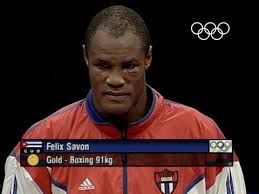 Then there is Felix Savon the heavyweight amateur boxing champion from Cuba who won three Golden medals at the Olympics and won 6 world championships. He was offered many millions to fight Mike Tyson but he refused. At age of only 33 years old Savon retired. Sometime later he had a song “You Loves US” it was dedicated to him by the first rock band to play in Cuba “Maniac Street Preachers” in witness of Fidel Castro. Savon helped training Boxers from Cuba for the 2004 Athens Olympics he kept declining millions of dollars to become pro.

The Russian wonder wrestler (his father was a truck driver and Amateur Boxer) won gold at the Olympics in 1988, 1992 and 1996 his record his 887 wins with two defeats, yet he only had one professional MMA fight. On 21 February 1999 Karelin fought against Maeda in Japan in Maeda’s fight organisation named “rings” (Randy Couture lost to Valentine Overeem same organisation “Rings”). Despite Karelin won the fight, he never went back to professional fighting. Putin invited Karelin for a position in politics and that was the end of his professional fight career. Ivan Karelin is the son of Aleksander and was born 1994 he is now competing in the Greco-Roman heavyweight division and it wonders me why he has not been contacted yet by any MMA organisations?

I just imagine if these “attributes” of talking trash, being in the press 24/7, relationship scandals, political “outrage” preferences, challenges etc could be orchestrated and implemented at will to further a fighter’s career, like movie stars do.

I can see Golden Glory fighters, Semmy Schilt, Nieky Holzken or Robin van Roosmalen with these personality attributes and scenarios in their personal life, their careers would look totally different (from a financial point of view). Then again there is charm and something very admirable in people’s character to just be themselves and decide how they feel what is the best way to present themselves and how to prepare for a fight and behave inside and outside the ring regardless if it brings them millions more dollars and fame! Exceptions to the rule is a fighter like Ramon Dekkers, who did not need any of the above to become a global legendary fighter, his hobby was fishing like Mike Tyson like his pigeons, both met each other in the Cage in England and there was something magic! 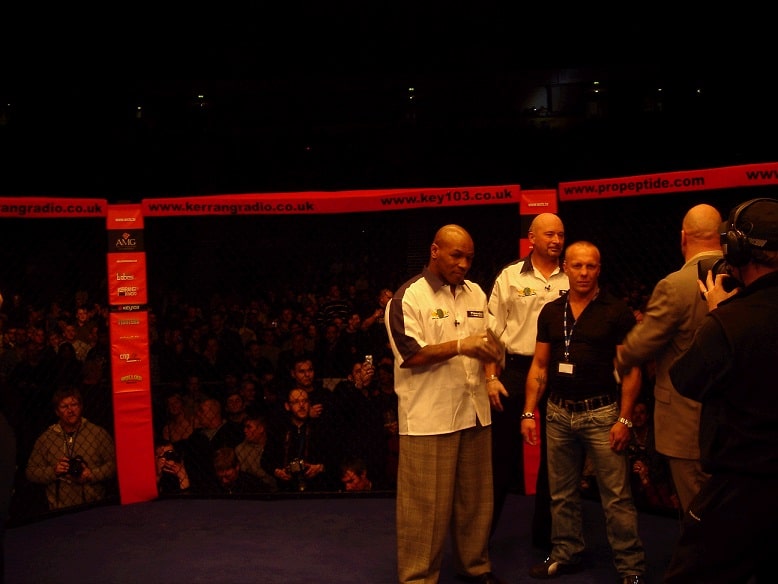 Quote Bas Boon: When your ego becomes a way of life, the reality cuts like a knife, when your ego makes you lie, your creativity is dies. Pointing the finger at someone else to blame is the ego’s top performance and a short happy life of fortune and fame.

“My opponent is my teacher. My ego is my enemy” Renzo Gracie

Joe Rogan Is The Target of Ivermectin“De-Wormer Hoax”.