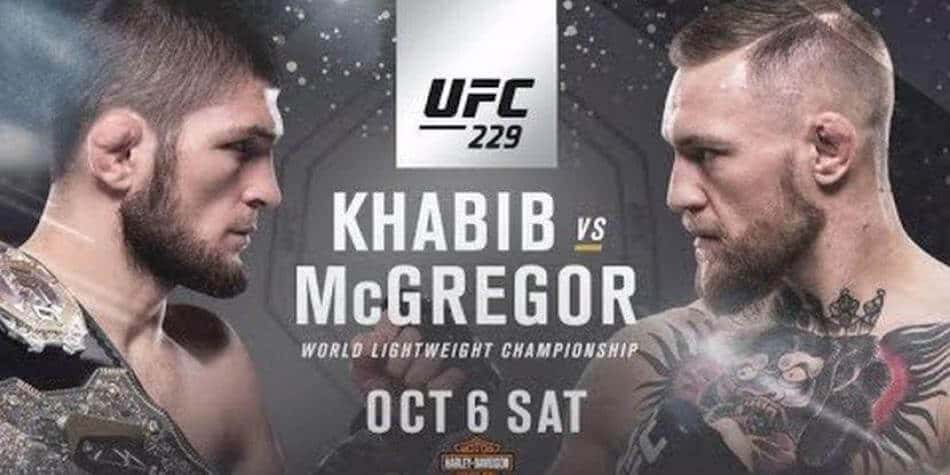 McGregor vs Khabib, Nations, Religion, chaos and Satism. After tons of trash talk by Conot McGregor and a super hyped promotion for months including tons of re-runs from the bus incident it was showtime. Lots of testosterone and ego at stake and in my expert opinion I expected Khabib to win.

Khabib would win the fight because of his excellent ground skills. I should point out that McGregor was arrested after the bus incident and convicted by a New York court.

That did not prevent the UFC from using the footage to hype the event and increase the PPV numbers. Something I also would do as a promoter (I am not a hypocrite).

The UFC 229 was without a doubt one of the most entertaining spectacles of the last year.

The incident with Khabib and McGregor kind of made you forget how good and entertaining the other fights were.

My prediction was that if McGregor didn’t change his strategy, wide stance it would be easy for Khabib to take him down to the ground where he would be the master and control the fight, which is exactly what happened.

The true face of Islam shows up again.

Khabib apologized to the Nevada Athletic commission and Vegas, that was ok and like it should be. However, Khabib had to follow up with the following remarks:

People talk about me jumping over the cage? He claims he does not understand? Then talks about whataboutisms, well McGregor attacked the bus which was a long time ago. McGregor talked about my religion, my father and country says Khabib.

Of course, everybody talks about the Khabib incident, it just happened.

And there you have it, the truth comes out. This is how Khabib really thinks and if he could kill for his principals?

I assume he would ( that is my opinion after watching the actions of Khabib when the fight was over), where have we seen this before?

Khabib, you just had your revenge, you dominated McGregor and punished him for all the words he threw at you. They were just words (except for the bus incident in which case McGregor was punished by law).

Now, remember you are in the US where there is freedom of speech. They ridicule President Trump every second of the day just look at the mass media and SNL.

Khabib states he wants to change how people talk when participating as an MMA fighter. His totalitarian indoctrinated thought pattern from birth is coming to the surface.

Attempting to dictate how other people should behave. A Muslim who wants to control what people do and say.

With that said Khabib portrays Islam in a bad light, it’s plain and simple, statism and authoritarianism.

Khabib continues: this is respect for the sport, trash-talking does not belong to sport, I want to change the game? This is hilarious and hypocritical.

You are not allowed to trash talk before the fight according Khabib, but you can instigate violence after the fight is over?

The perfect moment, unfortuantly a wasted opportunity for Khabib

If there was ever a chance to put your excellent performance in the spotlight and be the better and more mature fighter, this was the moment, but you failed.

Where many people have a bad impression of Muslims and the religion of peace Ïslam” because they seem to get offended at every corner and use violence because of it, you proved them right.

Freedom is to say what we want, the growth of the sport of MMA came from the risk of venture Capitalists and US casino owners. Through the people like Quinton Rampage Jackson, the participating of WWE star Brock Lesnar.

The UFC inform Alistair Overeem if he drew the same PPV crowd as CM Punk he would be on the main card, it’s just business.

Trash talk is another word for business hype, McGregor is King.

In K-1 the ratings were going down and there were many difficulties until Bob Sapp came to the rescue. Bob Sapp’s two time victories over Ernesto Hoost and many Dq’s made the ratings rise like never before.

He was a performer that everyone wanted to see in Japan. Akabono is a huge sumo wrestler he lost 12 of his 13 fights. But Akabono scored the highest ratings. Those two individuals also made it possible for many real kickboxers to continue making money for 5 years.

Fighters spending time in prison, to much testestorone and ego.

Both Muhammad Ali and Mike Tyson became Muslim both spent time in prison and both went downhill from there. Allah did not help them.

Muhammad Ali was very specific but clear in what he thought about racism. He openly stated he loved beautiful black babies and did not understand and condemned black people that had relationships with white people.

But that’s his choice, I do not admire him less because of that, he did not put up his arms as he did not want to kill human beings he did not know. I do not consider that an act of coward is less but a choice everybody should be able to make.

Muhammad Ali had the freedom of speech and was a great trash talker who put boxing on the map (Chris Eubanks comes to mind as well). Not only that: Muhammad said he liked a cartoon which message was that Christianity was the religion of the oppressive white establishment!

Take a good look at yourself Khabib and ask yourself what happens to people who draw a cartoon or mock Muhammad? No problems with the views of Muhammad Ali.

My friends also loved his trash talk and his boxing skills and his honest no-nonsense view of his views on life. I do not have to agree with these views. But Muhammed Ali should and he had the freedom of expression to publicly say what he thought.

The moment you want to take this away from people, you are on dangerous territory! Imagine you would mock the prophet, Mohammad, in a country like Pakistan, Chechenia, or Afghanistan?

The ear-biting incident with Mike Tyson was the hottest topic in the media for a long time, so will be this action of Khabib.

The devastating effects of religion can be seen in sports and is quite ugly and should not be allowed:

Khabib, the reason they give you a chance to perform in a show like the UFC is kind of ironic by the words you use to speak. Creator Art Davie and many people at IMG are all Jewish and Capitalist.

Sjeik Mohammed putting 100 million in the UFC. In March the Saudi’s report they would invest another  400 million. So, Arabs working together with Jews to entertain Atheist and any other human beings who belong to whatever group they want to be. Regardless colour or religion,  it’s just business/entertainment!

As a manager I have dealt with religious problems within the team, just imagine I had Heath “the Texas Crazy Horse” Herring and even some members of Navy Seal team 6 training with Golden Glory.

Navy Seals training with Muslims in the Golden Glory Gym

There would be some of the fighters that claimed to be Muslim who openly would start telling fighters how they should behave or demonize them because of the lack of religion.

I managed to keep this out from the gym as much as possible, but it was never an easy task and it cost me some talent over the years. It has everything to do with the individual take of a person. How do the parrents raise their spouce and surrounding, his friends and habits.

One of Heath’s training partners was world champion MMA The Turkish Terror Faith Kocamis, they laughed and went out together in Tokyo, rolled with each other. They had daily sparrings sessions and there was never any tension.

That had everything to do with the attitude of Fatih, the same I can say about Gokhan Saki, Never had one problem in 12 years with Saki regarding religious views.

No religion in our dojo, the only religion is fighting and the team

However, there were others and some could actually cause harm within the team, even more so, friends or others outside the team who were trying to influence others. Lecturing fighters how to pray 6 times a day and would point out how to behave.

The police special terrorist unit came and got the Golden Glory fighter,, they charge him with terrorism which completely surprised me. I never heard a bad word from this Moroccan fighter, he is still in jail now.

Now there is some irony in this as well, many years ago the Navy seal team 6 was training with Golden Glory in the Netherlands. In the same class there was Muslims (them sparring together). The fighter who now has been arrested on terror charges.

Mc Gregor did not press charges, he got humiliated publicly in the cage on the UFC rules. Khabib it’s a business and ideally you do not take it personally, clearly Conor moved on.

Conor McGregor did not press charges

By not pressing charges and openly inviting you for a rematch, this fight could become to be an all-time greatest. People just want to see a good fight, many wanted to see loud mouth Mc Gregor going down, you did your part.

No need to educate others how to talk or behave in the US or anywhere else. Let everyone live their lives. Go read the book The four agreements; Never take things personally, Never make an assumption, Always do your best, be impeccable with your word. Live by those 4 rules and Peace will be upon you!

For the believers: Inshalla let that be for yourself, if it is Gods will, humans should not try to change his mind or tell others how to behave and live in his name.

For Khabib despite being undefeated and one of the best MMA fighter on the planet, stay classy

I know it’s wishfull thinking but boy oh boy would you made yourself immortel after the fight by just getting the belt and go away. In the press say to Conor McGregor “i forgive you for all your trashtalk” maybe you not know any better or you just hyping the fight.

As for McGregor, keep training and fighting, even after two years not competing and hundreds of millions in the bank. You came back to fight the best in the business (even took one round). The trash talk I can accept from you, like Mayweather or Mike Tyson and Muhammed Ali. Yes you trash talk, but you proved yourself as well and you are one of the most entertaining fighters on the planet. Keep it real!

One thought on “McGregor vs Khabib. Nations, Religion, Statism.”

Texas School Shooting, Hero Mom, We Must Stop This?

Texas School Shooting, Hero Mom, We Must Stop This?

Texas Shooter Salvador Ramos, was he gay, why, why?